Since 1998, Maggie Speaks has provided high quality, experienced, and customizable musical entertainment to private and public events from Sydney to Venice to our hometown of Chicago. Having shared the stage with names like Earth Wind and Fire, The Doobie Brothers, .38 Special, Rapper Ton Loc, Loverboy’s Mike Reno, and Starship’s Mickey Thomas among many others, Maggie Speaks is considered one of the hottest live bands in the Midwest. They’ve also performed for some of the largest corporations in the world, including Pepsi, IBM, Estee Lauder, Nike, and Marriott. Covering music from the 60’s through today, Maggie Speaks has no musical limits. Rock, Pop, Top 40, Dance, Funk, Country, Hip Hop, Jazz, Motown, R&B and more, Maggie Speaks musical diversity is second to none. The members of Maggie Speaks include founder and vocalist David Calzaretta, Vocalist Nicole Garza, drummer Blake Cooper, bassist Shawn Sommer and guitarist Samir Varma. (read more) 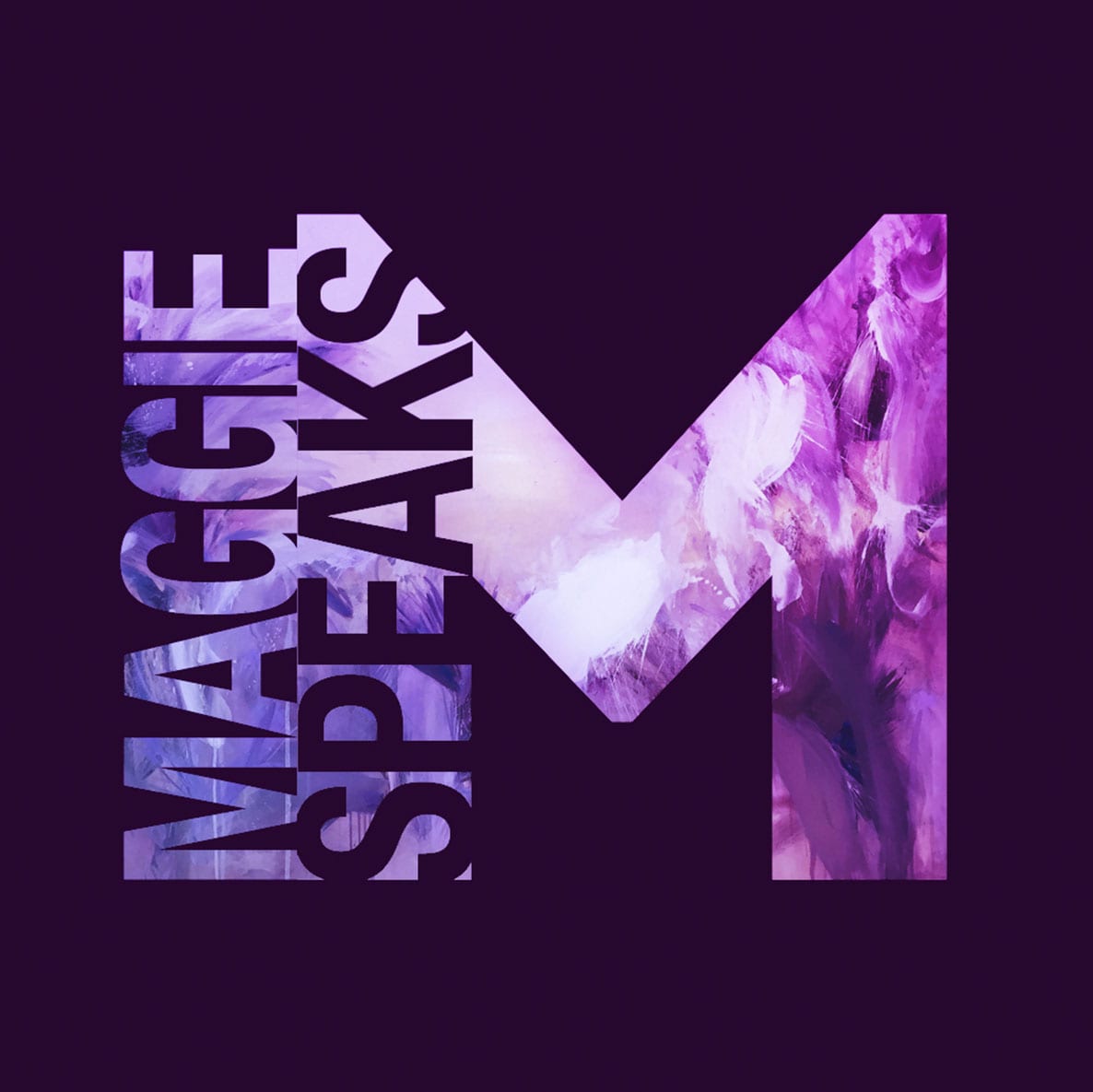 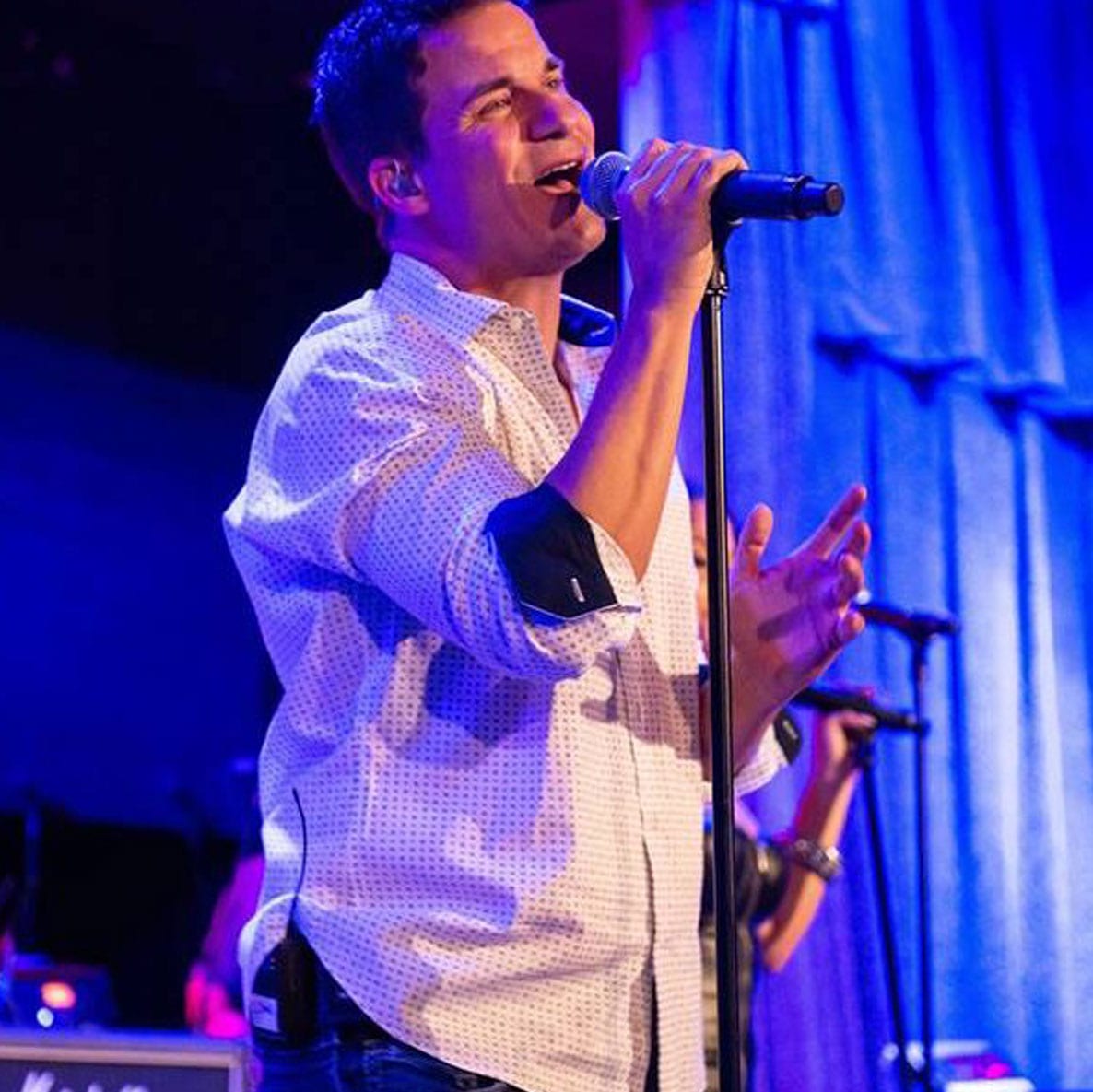 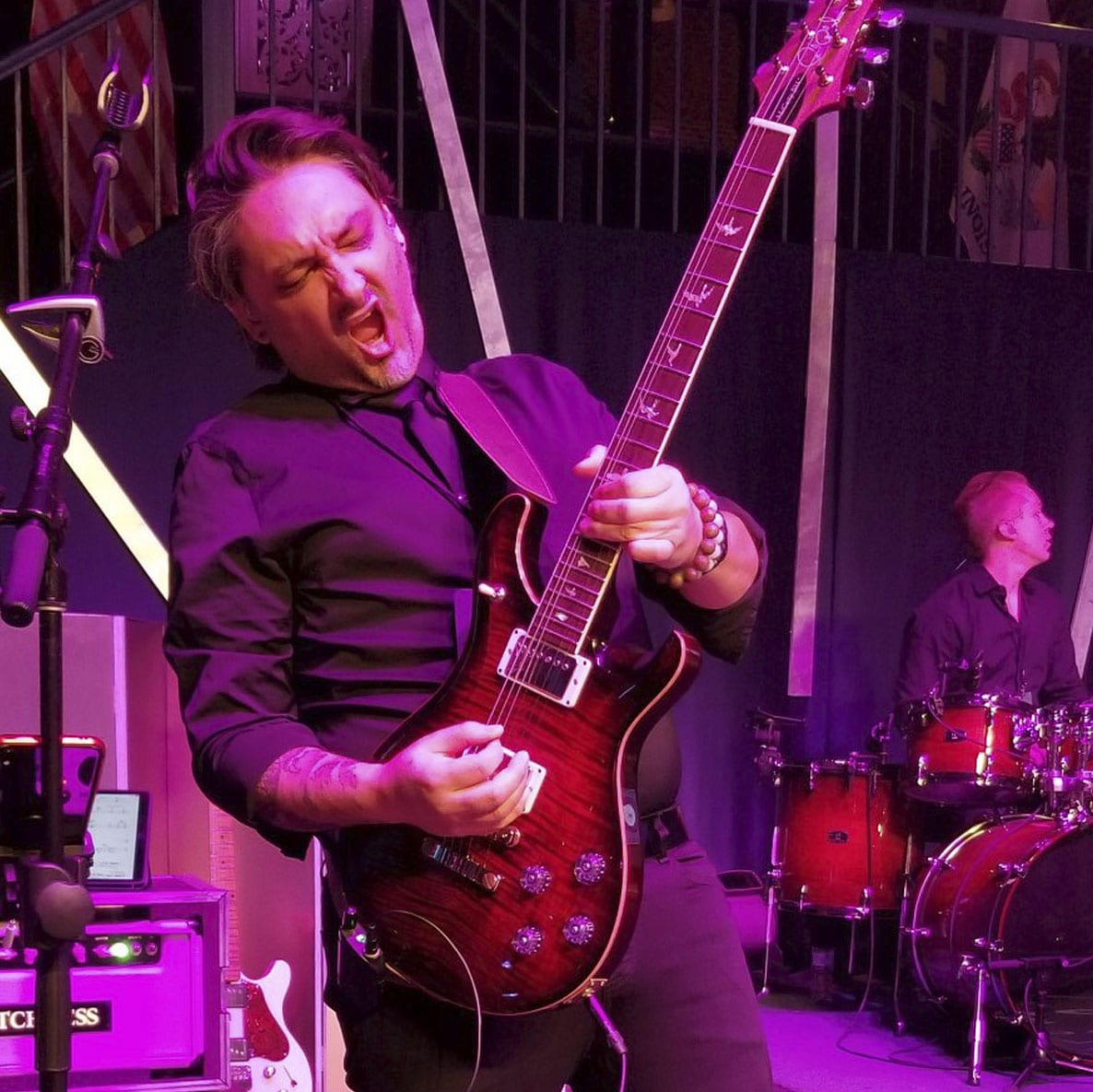 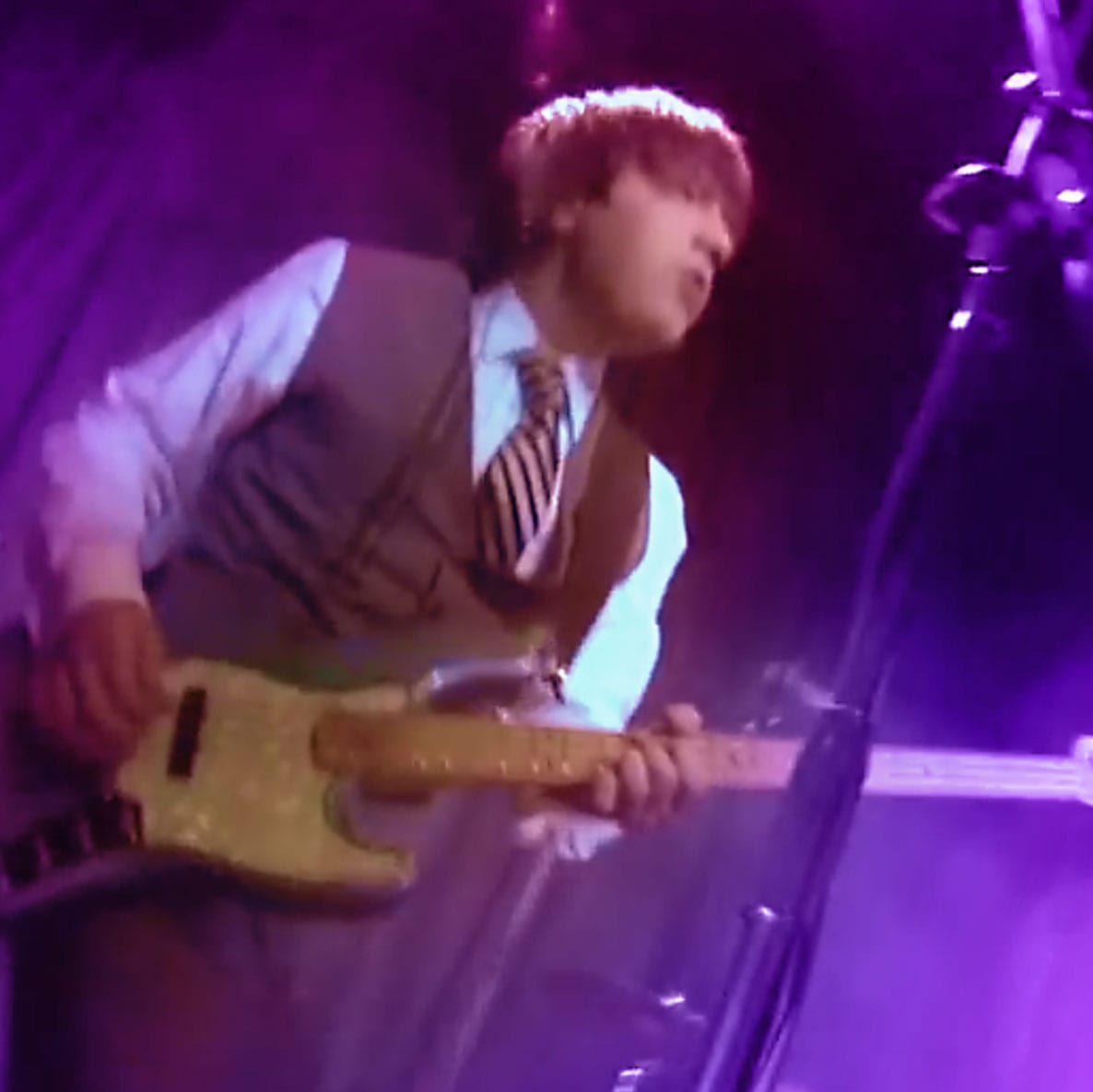 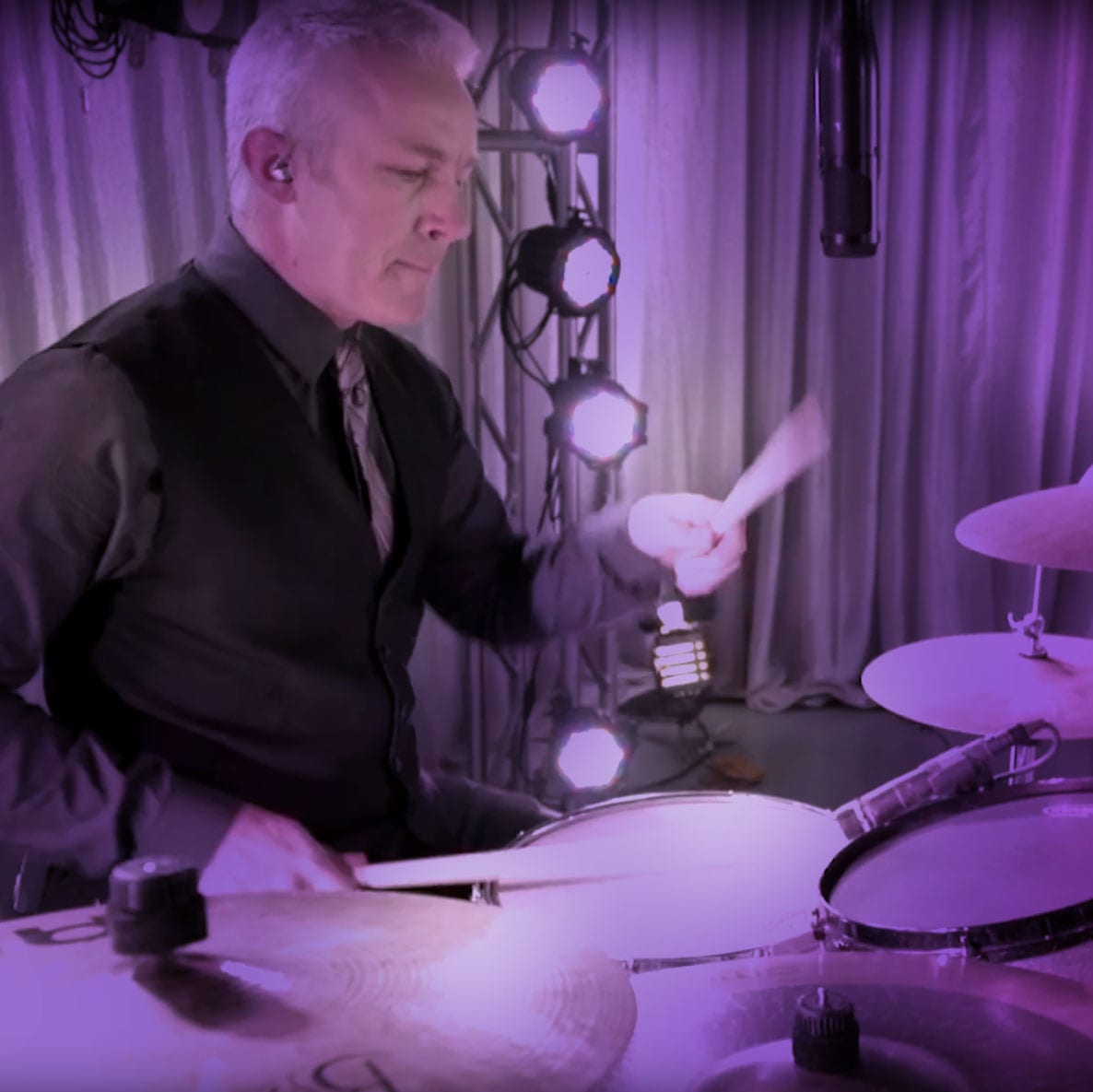 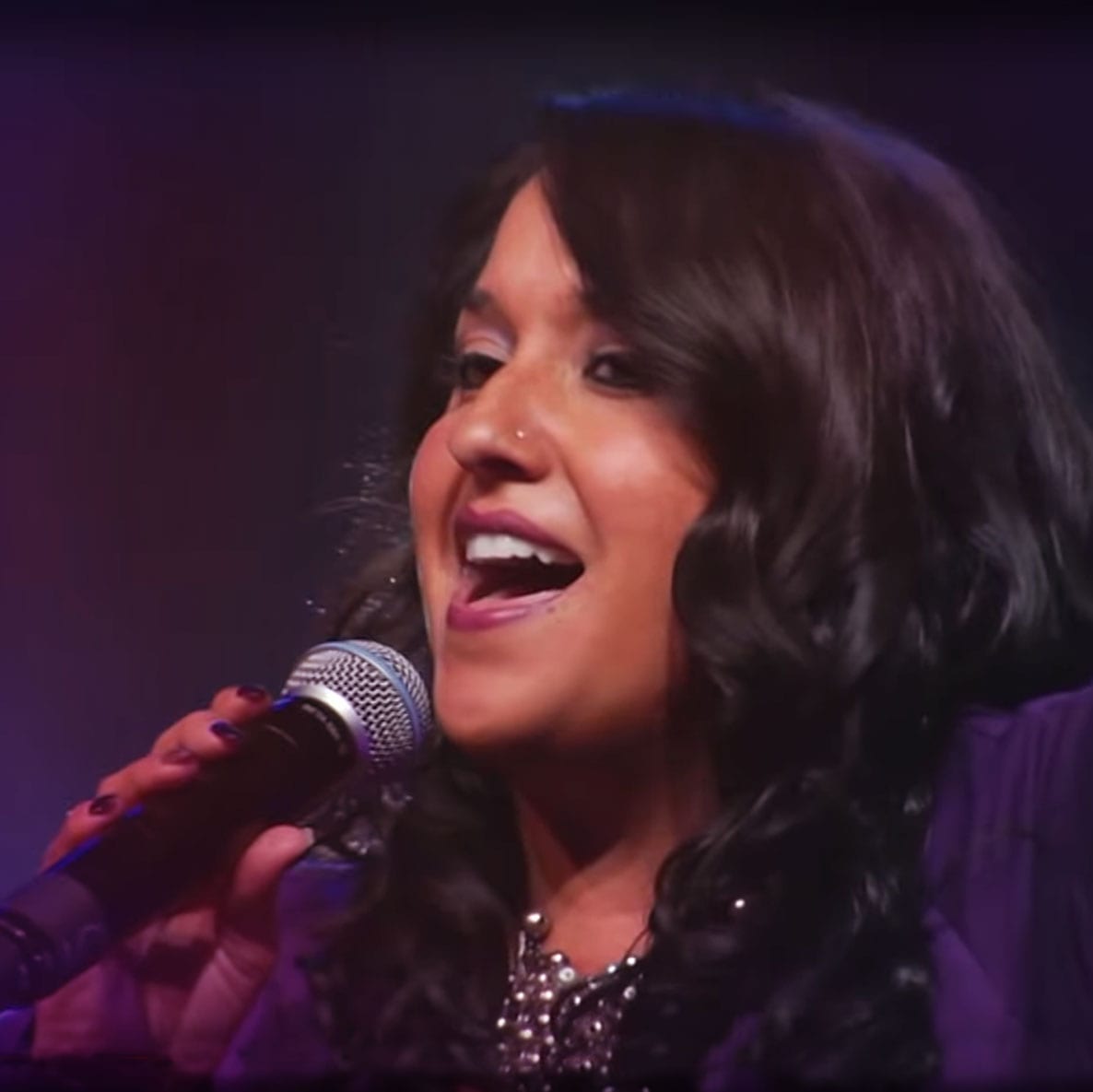 Then came the critically acclaimed and customizable sister bands. Maggie Speaks consistently has performed between 150 – 200 shows annually over the past 21 years. Their demand became so high that in 2006, they created a second band called Spoken Four, consisting of 5 additional musicians with matching skill sets to provide clients with another option from the brand and style they trusted and desired in the event that Maggie Speaks was unavailable. In the first year, Spoken Four performed 140 shows, leading to the creation of their third band Final Say in 2007. Final Say also began performing around 140 shows a year in the wedding, corporate, gala, fundraiser, night club, country club, festival and private event market. They continued to build trust and a reputation for highly professional performances with packed dance floors and boundless energy. In 2013 they created their fourth band Shout Out and then replicated for a fifth time in 2015 with the creation of Enough Said. Now collectively the bands perform approximately 500 shows annually in both the Chicago and global market place.

Talk Of The Town Big Band. In 2015, they took the knowledge that they learned about reading audiences, crafting medleys, producing events and executing flawless performances and created Talk of the Town Big Band which can scale anywhere from 8-15 pieces. This configuration is for clients that want a bigger footprint and visual impact with multiple singers / front people, live horns and strings. Talk of the Town is different from other big bands in that their front people are not tied behind music stands or iPads reading lyrics. They are putting on a show and interacting with the audience, creating a rapport with the audience that is second to none. 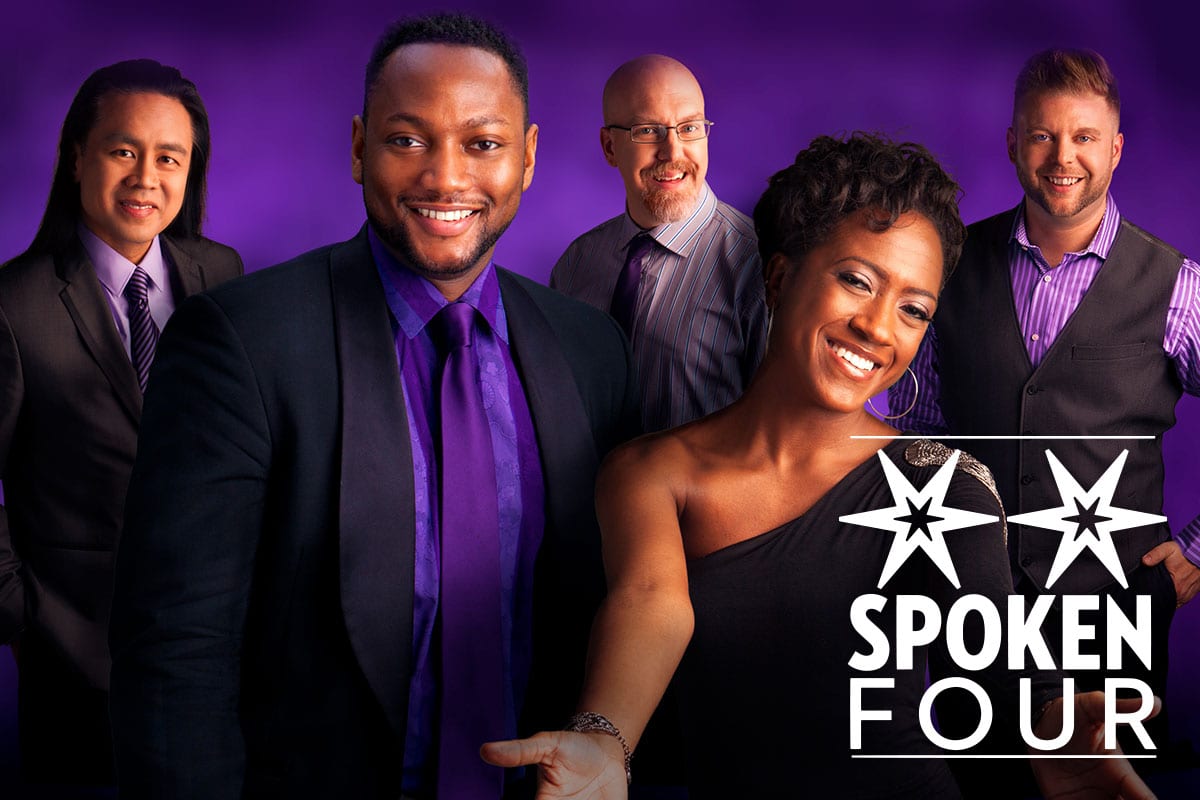 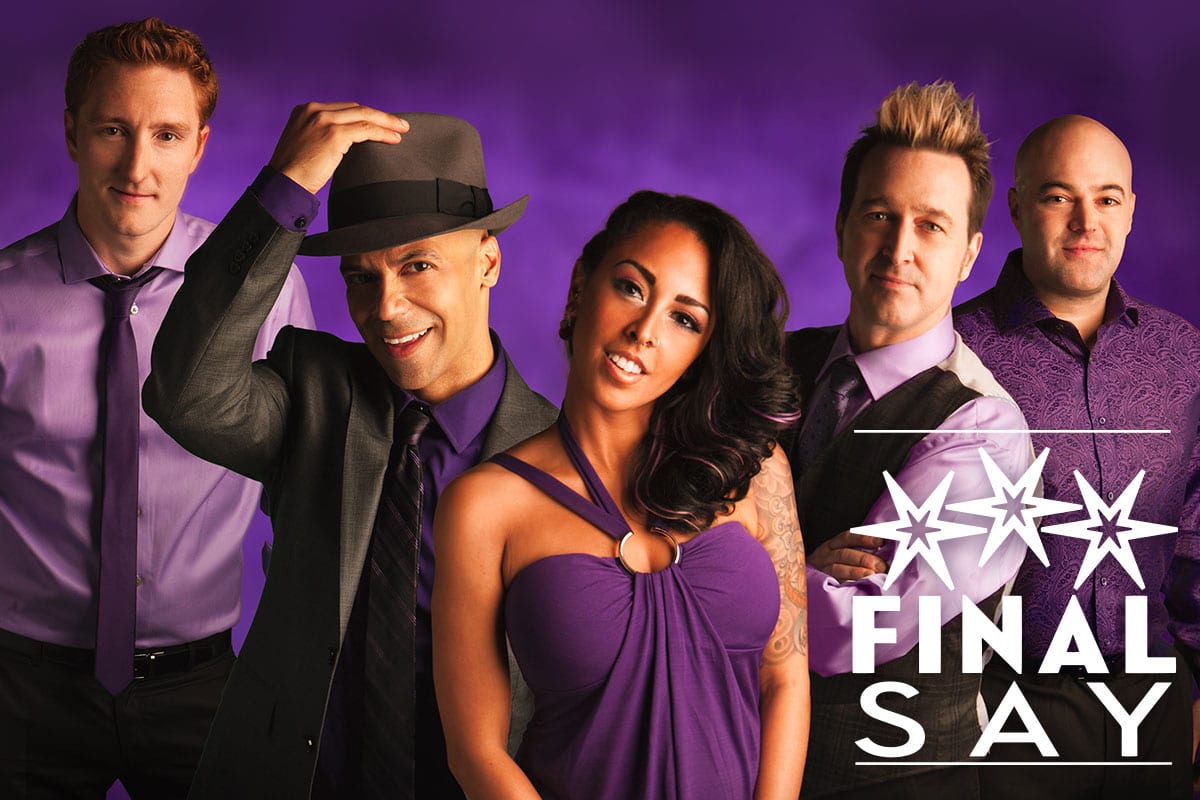 Final Say delivers a rare treat of sizzling chemistry, incredible energy, and songs no one can resist. 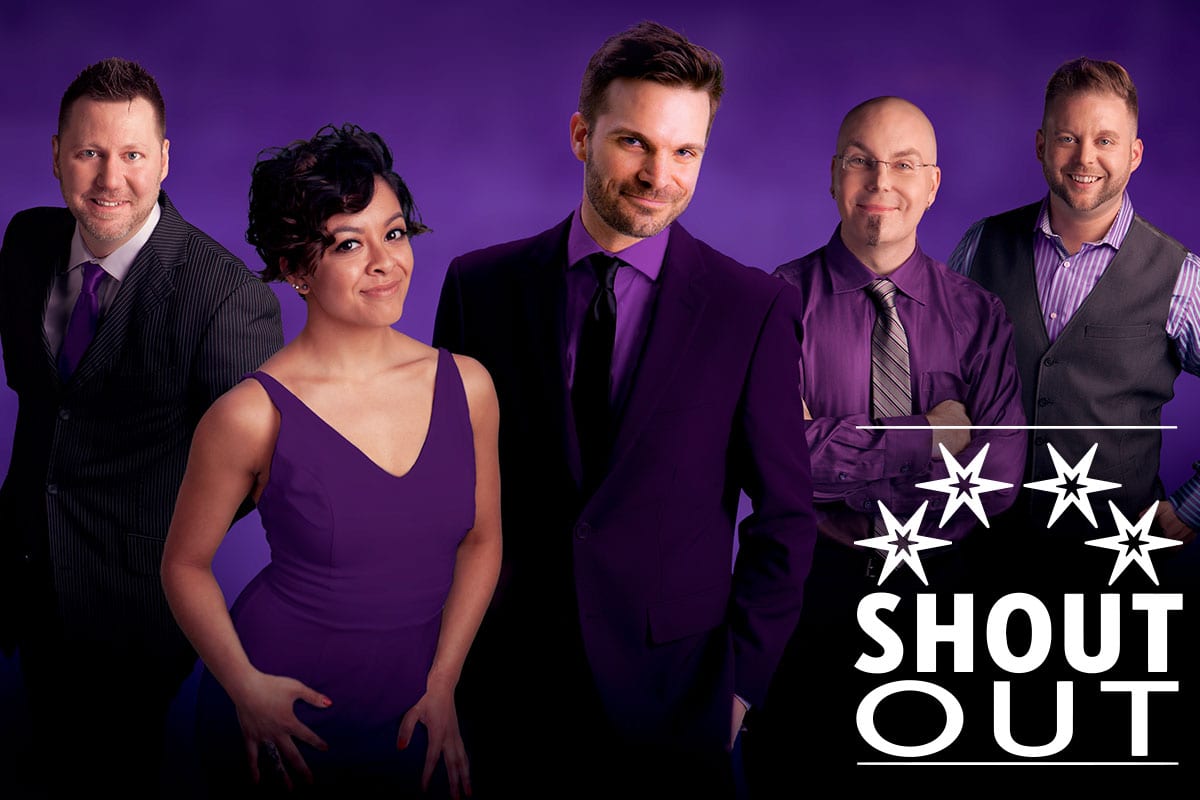 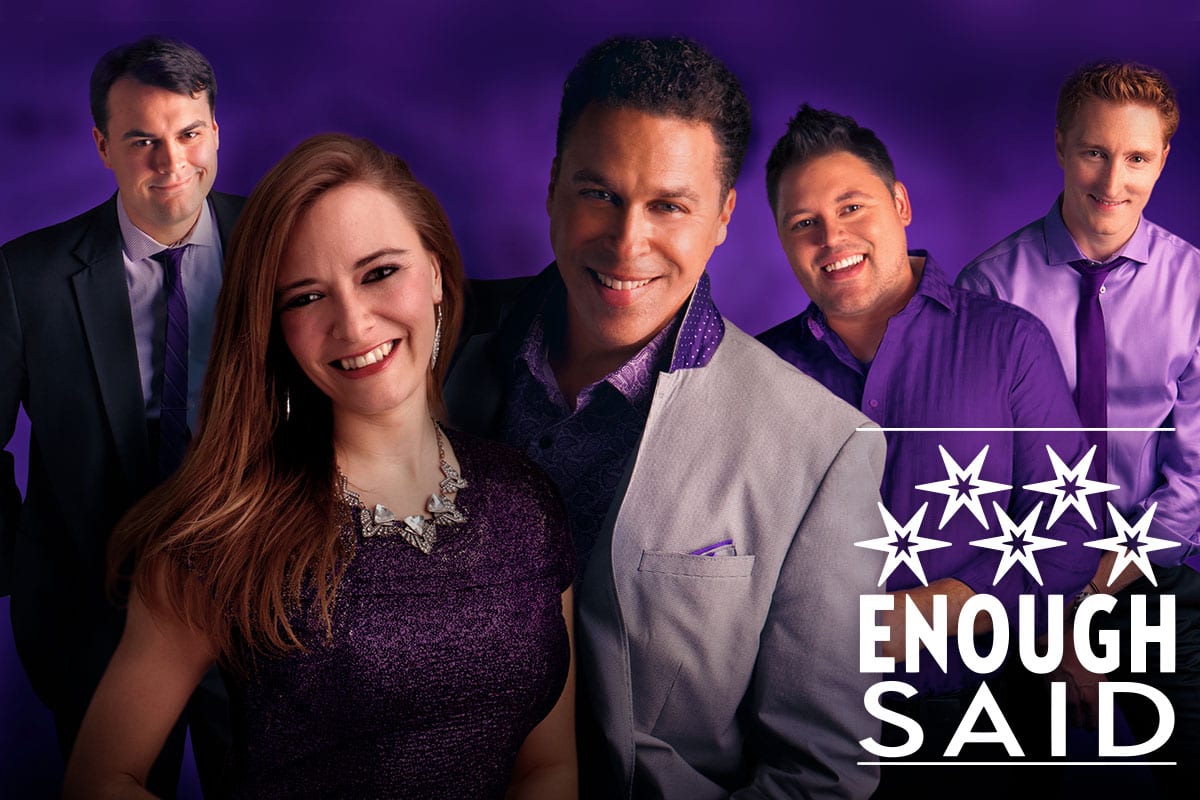 Enough Said’s musicians and vocalists have toured with some of the top rock and pop artist’s in the country. 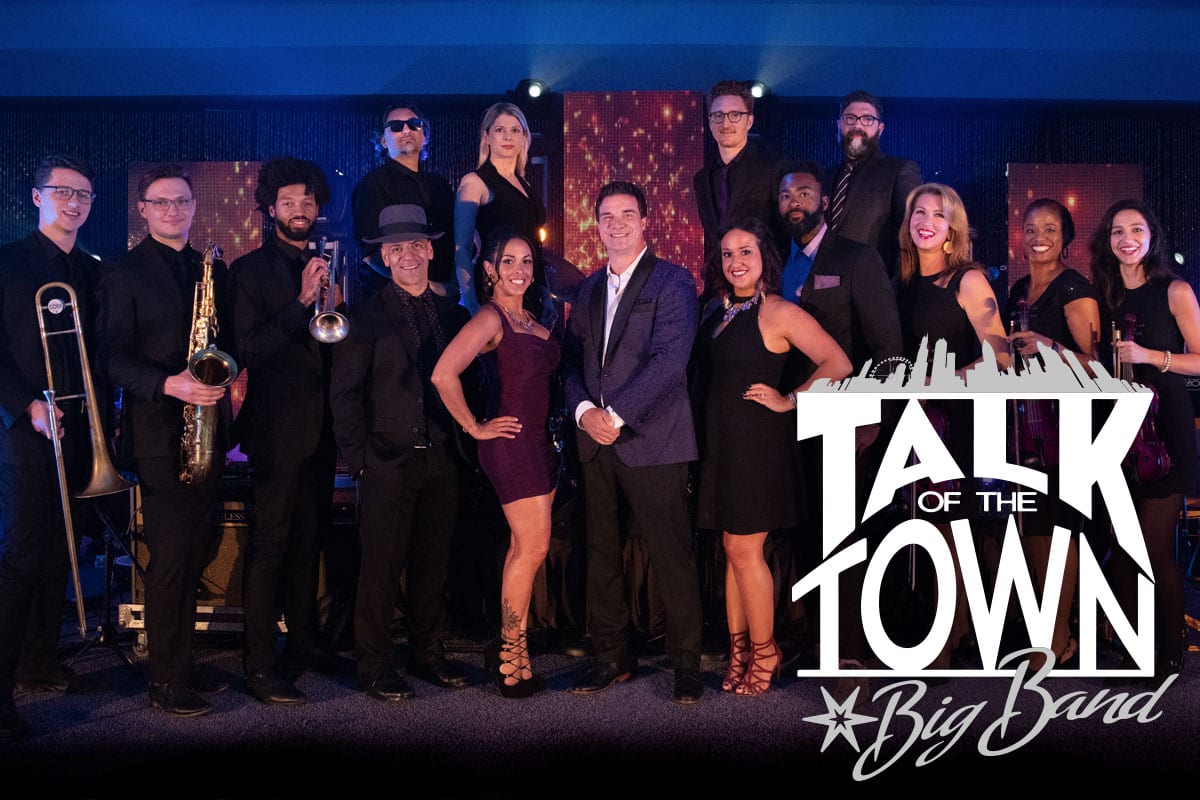 The possibilities are endless as the Talk of the Town Big Band can cater to your every “big splash” desire.

Watch Talk of the Town

A MAGNIFICENT MUSICAL JOURNEY BEGAN WITH A NOT SO TYPICAL START.

Dave Calzaretta, founder of Maggie Speaks and lead vocalist graduated from Indiana University Kelley School of Business with a degree in Accounting in 1996. After passing the CPA Exam in 1997 in Minnesota on his first attempt he moved back to his hometown of Chicago, ready to start his new carreer.

Answering an ad, tossing a coin. As it turned out, numbers were not enough to satisfy Dave. He became restless to return to his first love – music, mostly as a side gig to keep things interesting. He answered an ad in the Chicago Reader posted by two brothers (one a drummer and one a singing guitarist / keyboard player) looking for a singing bass player to potentially start a band. It clicked. Someone’s contact number had to go on the bottom of their Demo CD. With the loss of a coin flip Dave became the ”booking guy”. He put his business skills to work and got the band in the right venues and marketed effectively to draw crowds.

“The band is able to perform almost any genre of music so no matter what situation or audience they are in front of, they always have a deep well of music, and decades and genres to draw from.”

More of a band that plays weddings than a ”wedding band”, Maggie Speaks grew the wedding segment by word of mouth. They packed dance floors and pushed the envelope with modern music at a time when most wedding bands were thoroughly rooted in the disco 70’s and Motown music. They began to craft a strategy with how to be relevant to both younger and older generations. They took the best elements of what a DJ would offer by providing a repertoire with no musical boundaries and a constant non-stop approach of going song to song with no dead air.

They began performing at corporate events in 2000 after a Fortune 500 executive saw them perform at a night club in Chicago after a Cubs game. He saw the crowd and the response and decided that this was the energy that he wanted at his company’s next event. After a hugely successful showing, the company began traveling the band all over the US for their events in other cities. Eventually this led to international travel. To date, Maggie Speaks has performed in 13 different countries and 33 different states.

Corporations began trusting Maggie Speaks for their biggest events and would often commission the band to build specialty theme shows such as a disco night, a Latin night, a country night, an 80’s night, a 90’s night, a yacht rock night, a tribute to the Eagles, an unplugged acoustic night. This led to the band being able perform almost any genre of music so no matter what situation or audience they are in front of, the always have a deep well of music, decades and genres to draw from.

“Celebrity Sit-Ins provide clients and the audience with the star power they seek at their events at an affordable price without the hassles of traveling celebrity talent.”

An evolution to House Band for the Rock Stars. In 2007, the band added a female singer to the mix to further broaden their repertoire. In the 2014 the band added a hip hop artist to continue to capture the evolution of music. In 2017, looking for yet another angle and way of staying relevant and staying true to society’s YouTube short attention span generation, they began working with current and former lead singers of world famous bands in a model called Celebrity Sit-In. Maggie Speaks serves as the house band for the stars as they rock through their 4 – 6 biggest hits. It provides the clients and the audience with the star power they seek at their events at an affordable price without the hassles of traveling celebrity talent. It is high impact in that you hear the hits and only the hits with no B-Sides or filler material without sacrificing the variety that Maggie Speaks brings to the performances.

Never getting boxed into a corner is a key to Maggie Speaks success. The clients of Maggie Speaks are provided with both great entertainment and an event producers mentality that is crucial to their events. Being a creative force in the industry allows clients to customize and design their events around Maggie Speaks. No longer is it taking a square peg and sticking it in a round hole. Dave Calzaretta and the band are able to gain a quick understanding of their clients themes, wants and needs and develop a custom program that leaves their guests in awe of what they are witnessing. 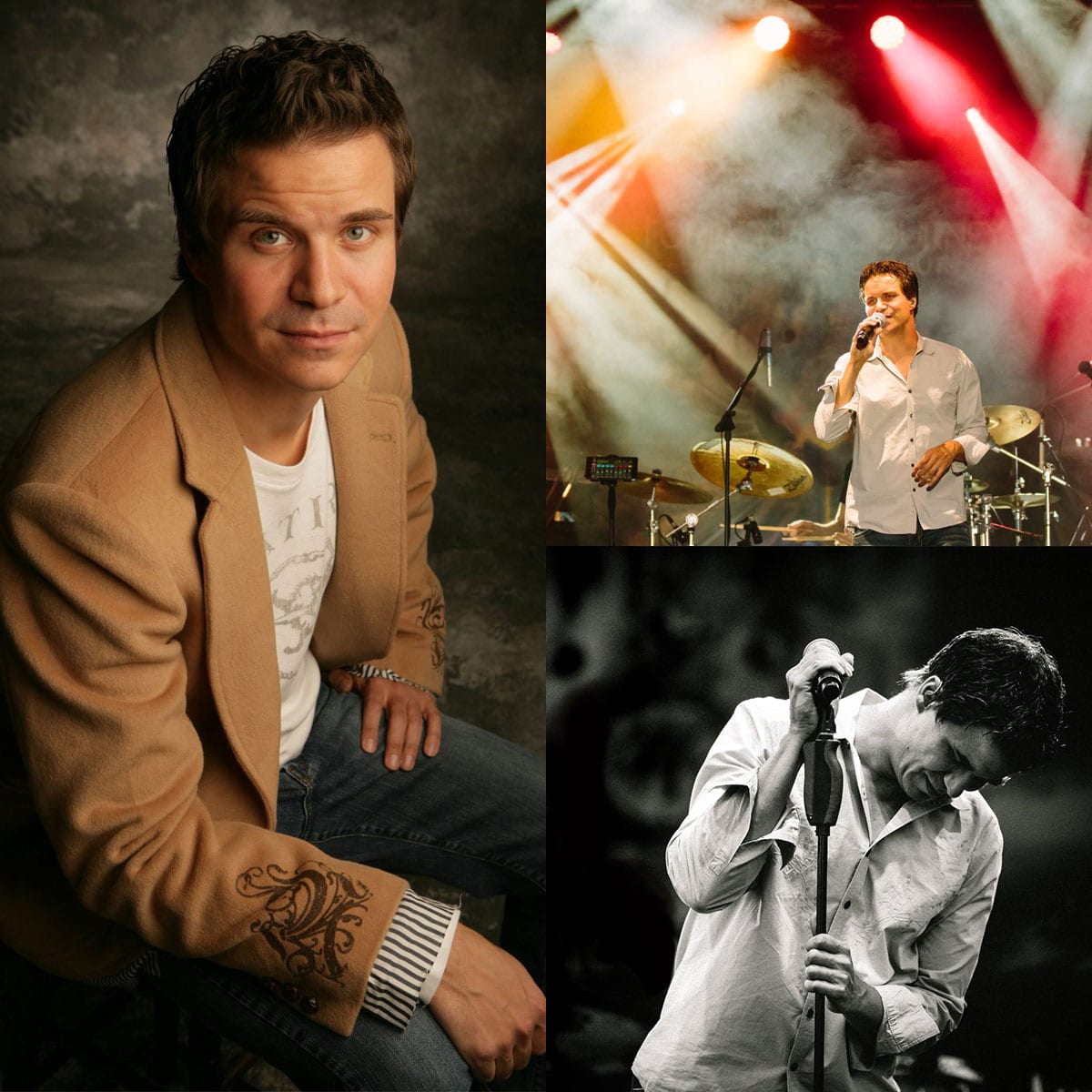 Part of what makes Maggie Speaks successful is the personality and reputation of Dave Calzaretta, band founder. He has sat on the board of directors from International Organizations such as IACEP (International Association of Corporate Entertainment Producers), and local Chicago board of directors such as ILEA (International Live Events Association…formerly International Special Events Society). He founded his event production and talent buying company Magnificent Events in 2000 and has been producing shows, bands and other entertainment ever since. He has booked celebrity talent such as Lionel Richie, the Barenaked Ladies, KC and the Sunshine Band, the Temptations, the Spinners, 38 Special, Night Ranger, Asia, Phil Vassar, Colby Callait, Bret Michaels, Charlie Daniels Band, Kansas and more. Calzaretta is seen as an innovator and authority throughout the events industry, speaking nationally at conferences such as Biz Bash, IACEP (International Association of Corporate Entertainment Producers), AEP (Association of Event Professionals), Event Solutions and The Special Event and ILEA (International Live Events Association). 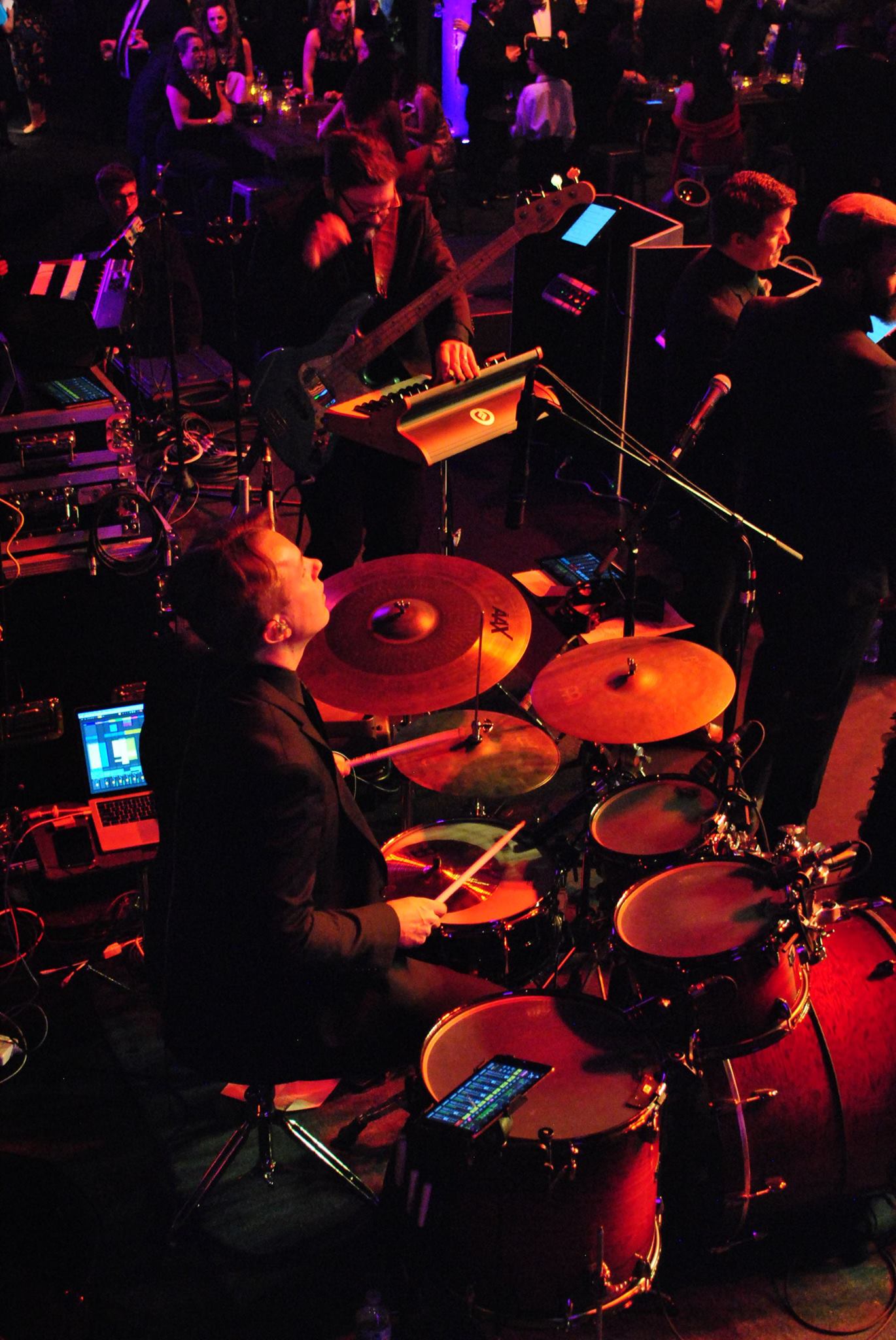 Behind the scenes Blake Cooper, drummer of the band since 2000. Blake continues to evolve the bands on stage product through his expert knowledge of technology, keeping up with the latest industry trends incorporating technology into live performance. His expertise allows Maggie Speaks to take national celebrity touring innovations and apply them to corporate and private events.